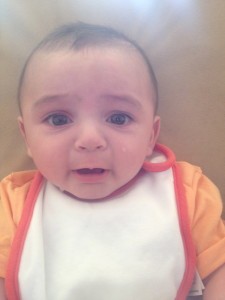 To be honest I wasn’t planning on writing something on this subject until about 6 months into motherhood. I was surprised to see the little Jay bird gnawing on his hands quite a bit around 3 and half months old even after a full feed and then noticed how heavily he was drooling. So approx. 7 daily soaked bibs later and an examination of baby gums Mr M and I concluded that we may have a teething baby and decided to confide in Google which confirmed our suspicions.

Skin rash or chapped skin around the mouth

Urge to put fingers in mouth and chewing them

There are home remedies to try like using  a cold spoon over baby’s sore gums to numb the pain temporarily or a chilled wet cloth for baby to chew on.  I still went and purchased some bits and pieces to get us through this early teething stage.

Bonjela Teething Gel which can be used for babies from 2 months old. It has  a local anaesthetic  to relieve pain and soothe sore gums. Not sure if it’s making any difference just yet but will carry on using it for a while. 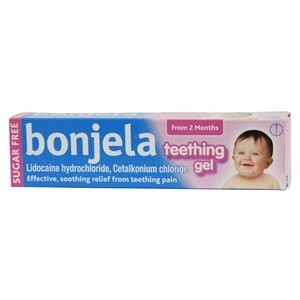 MAM Starter Teether & Clip Set Blue which still is a bit too big for Jay to gnaw at but it is light weight and easy to hold. Different nobbly bits on the surface to chew on. 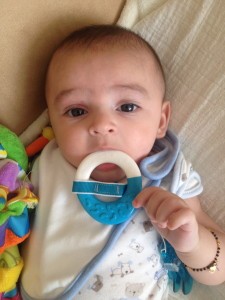 Jay and his teething ring 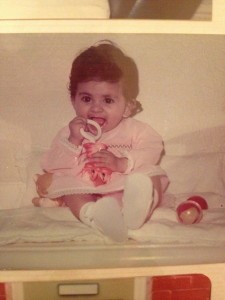 Jay’s mummy and her teething ring

Nelsons Teetha Teething Granules are a homeopathic remedy (no nasties) I have yet to test these. Our local pharmacist friend suggested this item which contains Chamomilla.

Sophie The Giraffe Double Ice Bite Teething Ring slightly disappointed in this ring as we have the original Sophie the Giraffe Teether which is great. This ring is quite hard and a couple of times Jay’s grabbed and managed to hit himself in the face with the ears and horns so it’s been put away . May be we can try it again when he a little bit older. 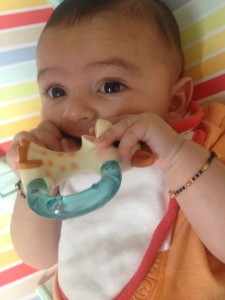 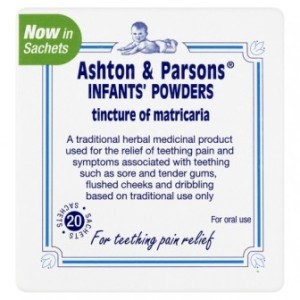 I was told about these magical powders by a friend who used them on her young sons when they were teething. They come in sachets 20 per box  and contain Tincture of Matricaria. They certainly seem to be having some effect as he does appear to be less cranky. The only trouble is having to put the powder on his tongue without it going everywhere.

I was surpised to learn that some babies are born with teeth wowzers. Good luck mums if you are breast feeding!

We’ve all been there I guess and he won’t remember any of this that’s what I keep telling myself anyway.  But for now Jay niagra drool falls  and I will have to wait for those toothipegs to make an appearance which will change the shape of his face forever.