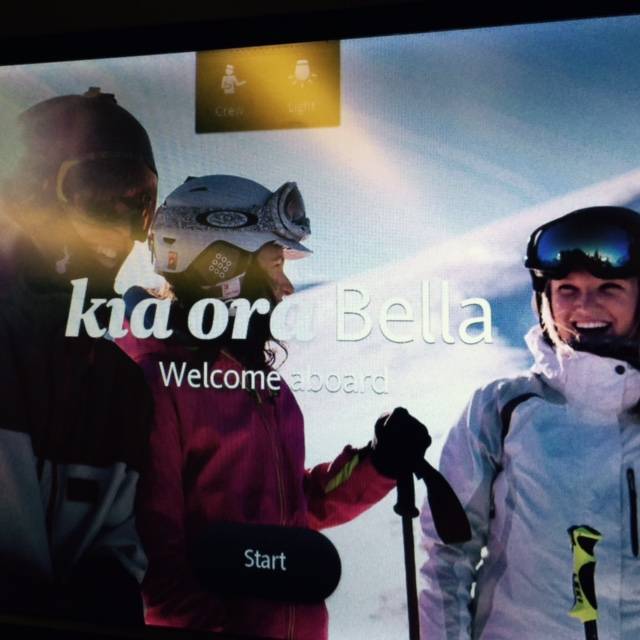 When the subject of visiting my brother 6000 miles away in Orange County, California came up in 2014 I laughed hysterically and quickly dismissed the idea because the thought of taking baby Jay on a plane scared the living daylights out of me.  I hadn’t seen my big brother for 5 years that’s pretty bad considering we get on very well. Then in October 2015 after some major arm and leg twisting the flights were booked.  Jay’s Uncle Buck wanted to meet and hold his nephew rather than look at him via a 2-dimensional Skype format and wanted to show me his home I’d heard so much about.

I was excited about going to California (I would move out there if I could) but the anxiety of planning the whole trip was in full swing.   That “I’ve got so much to do but don’t know where to start feeling.”  This was going to be our first flight as a family of three and a direct flight time of 11 hours to Los Angeles not to mention the travel time in between.  Our outbound flight was was one of the hardest things I’ve done, FACT. Jay cried  right on take off and this continued for 3 hours.  Although I’ve been getting better at not getting flustered in tense situations I was tested to the max. I kept it together for a bit but then sort of fell apart and the mummy tears flowed. Mr M was calm and seemed to be the stronger force but I found it hard seeing young Jay in distress. I knew it was tough going for us as well as the passengers lucky enough to sit next to us. I thought we were going to be asked to leave the plane via parachutes. You may have heard about the John Lewis Tantrum – Gate well it was sort of like that. BUT the passengers looked at me sympathetically.  I still felt awful. To make matters worse Jay was a little sick at one point but thankfully his beloved blanket was saved otherwise it would have been game over. The relief to come off that plane in Los Angeles was immense but then it was a long hour standing in the queue for US Immigration and Customs.  By the time I walked through those arrival doors and saw my brother’s face I was a blubbering mess. A reunion etched in my mind forever. 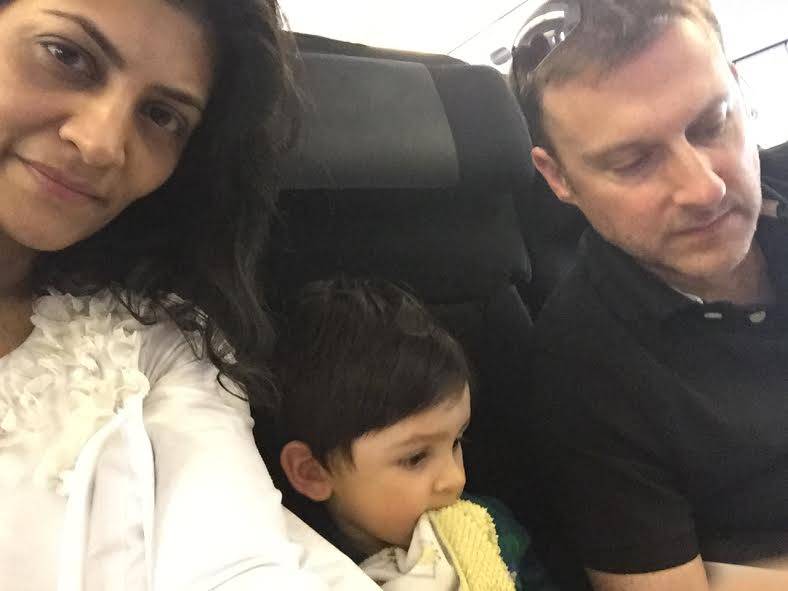 I should say the return flight home went perfectly praise the Lord! but I had prepared much better.  Jay was no trouble whatsoever and was a happy boy a complete contrast to the horrors we had previously experienced. Mr M and I even managed to watch some inflight entertainment together drinking plastic cups of vino. Not sure how many.

So how do you stay trapped in an aluminum canister with your sanity intact?

Preparation in advance is paramount. Of course some things do happen out of your control like flight delays and sickness but if you sit down some weeks before your trip and start writing little reminders this will make life a tad easier. I think it’s important to write down or store the details of where you are travelling to as in the flight number, addresses, contact numbers at hand in the event you are required to fill out the visa entry forms. Plus keeping the essential items at hand before they are stowed in the overhead locker. There are plenty of other things you can do.

Check with your Airline before you travel

Go to the airline website and take 5 mins to read their information. An example is checking stroller requirements and the types you can take on board due to limited space. Each airline will have different specifications so best to avoid any unnecessary hassle or you may be asked to check the item in. As you come off the plane always check with staff where you can collect your stroller, buggy as I nearly forgot mine!

It’s quite a challenge in the tiny toilet space under fluorescent lights, praying for 3 minutes free from turbulence.  I was thankful there wasn’t a nappy poonami to deal with during both flights but that was just luck I think! I kept the nappies, wipes, and cream in a separate bag under the seat. Usually trying to dress Jay is like battling with octopus legs but both Mr M and I managed to get through the nappy changes with little fuss. I did see a flight attendant help a lady who was struggling so don’t be afraid to ask for help. Also pack a lot more nappies than you’re likely to need.

Don’t do what I did which was ask for a Bayonet when booking the flights over the phone! totally different item Bella (*slap on head*) but it did make the woman on the other end of the line literally  LAUGH OUT LOUD.  The bassinet will clip into the wall in front of the bulkhead seats (those with a wall in front of them rather than another row of seats), but the cabin crew won’t be able to install it for you after take-off until the seatbelt sign goes off, for safety reasons. The bassinet is designed for infants up to 8 months old (and weighing a maximum of 11.8kgs/26lbs). Jay’s quite a long toddler and seemed to be ok other than the problem of his feet sticking out of the end but it was still comfy for him as he managed to sleep well.   If the infant is more than 11.8kgs/26lbs or older than 8 months at the time of travel, they may not be able to use the bassinet and you may be moved to allow a suitably aged infant to use the bassinet. The bassinet was great for us as it meant we could put Jay in there for his sleep rather than in our arms. The photo is blurry which is when I also realised my iPhone camera wasn’t working – it wasn’t a good day.

Ziplock bags and taking extra carrier bags in general are useful for your hand luggage too. Bear in mind you will have to put all liquids over 100ml into a clear bag at security so check nothing like that is left in your hand luggage to avoid further delay.  You may want to keep all medication together like calpol, sachets etc in a clear bag.

Absolutely mandatory in my opinion as accidents do happen.  A change of clothing is essential not just for baby/toddler but also for you. A mum who was traveling from London to Auckland sitting a few rows behind us was dealing with her sick 13 month old and she didn’t have a change of clothing after her son threw up on her. I offered a t-shirt  but it was too small. She ended up wearing her husband’s shirt. Not sure what he ended up wearing! I took 3 muslin cloths too which were very necessary in our case. As we were taking a late afternoon flight to Los Angeles I changed Jay into his pyjamas before boarding the plane and also took additional warm clothing  as it can get a bit chilly with the aircon.

Sods law my bag was selected to be open and all food was then meticulously inspected. Fair enough that’s part of the security process but it did cut into my ‘let’s sit down and relax time.’ Remember to check you have sealed food pouches.  You can actually pre-order baby/toddler food to collect at the airport in places like Boots The Chemist for instance.  I  didn’t do this because I had already purchased mine. I did take a sealed tin of formula which I then opened on the plane.  I packed plenty of biscuits, snacks and crisps. I fed Jay his dinner before we got on the plane and attempted to give him his milk feed on the plane  which didn’t work well as he was distracted by all that was happening around him. I’m sure that is not the case for all children and breast feeding and bottlefeeding your baby on take-off may soothe them and prevent ear pain. Sugar-free lollipops are good for older toddlers.  Check your meal requirements with your travel agent at the time of booking or at least 24 hours prior to your departure. Jay did eat from our meals and didn’t go for his child’s meal. Where possible, the cabin crew serve children’s meals before serving adults, so you can feed your child before relaxing and enjoying your own. I would also remind the staff that you have a child meal ordered as they can often miss it. They can also provide warm water to make milk feeds as and when you need it. 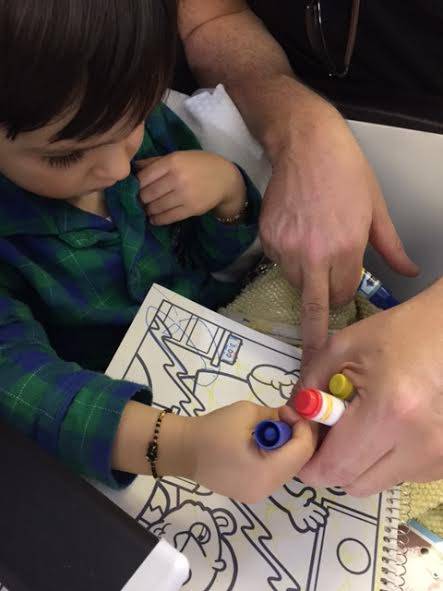 Never underestimate the power of a new toy. I bought a couple of new distractions presented to Jay which worked wonders. I didn’t bring out all the toys at once but timed it. Sticker books, and a no mess colouring book with a water pen were a hit. We avoided toys which had lots of pieces. Of course the Electronic babysitter our iNanny aka iPad was taking care of Jay and we stocked up big time downloading games, CBeebies episodes on the iplayer as well as YouTube vids prior to flying. Give yourself some time to do this don’t think it will all happen quickly. Just make sure it’s charged! We used an App called Downloads Lite to help make the process easier. The area at the back of the plane was made use of where the air stewards let Jay play and helped pass some of the time.

Some Airlines have Kids packs available to keep the little ones occupied and some go even further like Etihad Airways which has a dedicated sky-nanny/nursery on board for some flights,  great if you can get them!

Nothing worse than having a baby/toddler with you who wants to sleep all day and play all night because their time zones are messed up. We changed our watched to the local time straight away unless you are only travelling with an hour or so difference.

I hope these survival tips help to make your flight just that little bit easier. Mentally prepare yourself before you go. It will be long, it will be tiring, they might not sleep. I know I didn’t. Yes it is a pain when  the ‘put on your seat belt’ sign is switched on frequently and you have a toddler wanting to jump off your lap and run like a loony down the aisle.

Long hideous flights, like labour, will eventually be over too.

Good luck if you are travelling with your little humans soon! 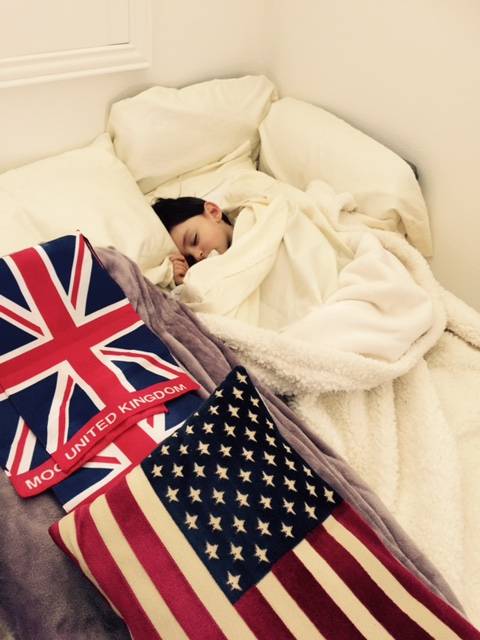