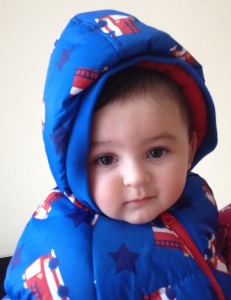 Boy is life with an eight-month-old busy but lots of fun.  This little character that I’ve partly created is laughing more which is a good sign that he will be silly like his parents and he loves chatting in baby speak stringing together vowels and consonants. Jay is saying dada and appears to say “Ham” at each mouthful of food??  but I’ve yet to hear that all important word  “mama” … please let it be next month!

Larry Lamb has emerged as Jay’s favourite security comforter and thankfully for my birdy he is still a Super Star baby when it comes to sleeping through at night. zzzzzzzz

Weaning is going reasonably well other than last week when he lost his appetite a bit. The lovely Ellie from All Things Mulligan made a good point that food is mostly seen by a baby as fun until about the age of 1.  I am trying to give Jay new tastes and textures and he seems intrigued by it all but generally loves his milk and is taking 700-800ml a day. 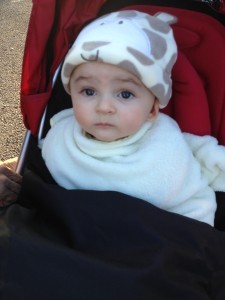 For me the biggest achievement is that the reflux has almost done a disappearing act PRAISE THE LORD! although I still have the carpet cleaner on stand by most days.  I change his bib at least twice an hour due to extensive drooling from teething. Last month he cut his bottom tooth and now at 8 months old his top two pearly whites are coming through. He loves the Bubba Bag Teething Toys and is making use of Bickie Pegs which reminds me of digestive biscuits. 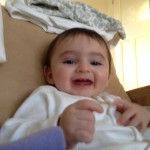 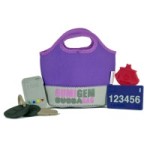 I think he is a little shy around strangers but usually warms up after a few minutes. He is definitely recognising family members and a lovely example was when I took him supermarket shopping with my parents and Jay and I wandered off meeting my parents later. He spotted them from a distance and his face lit up and he waved his little arms it was really heart warming. Talking about limbs I’ve noticed that when I clap my hands he raises his hands to his face.  I don’t think it’s a fluke as I’ve seen him do it a couple of times now.  There are beautiful moments for lots of parents and one I find special is seeing Jay’s reaction when Mark returns home from work  Jay shows him the jazz hands and has the biggest smile for daddy.  I fear he may not be a mummy’s boy after all. 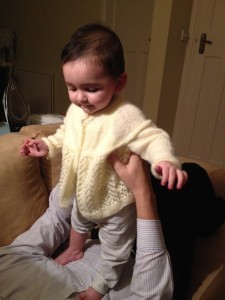 He loves Peekaboo and really goes for objects in particular the remote controls and my iPhone.  He’s already showing off how to use the iPad swiping the screen and playing Peppa Pig vids on repeat although the other day he was watching Barbie: Life in the dream house which I haven’t seen before. We are fans of the Cartoon Network too.  I’ve noticed he is spotting smaller objects like a paper clip that had mysteriously found itself on the carpet.  This has prompted me to start looking into safeguarding the home.  He has worked out how to open a  door to a kitchen glass unit and proceeds to open and shut it.   Peeling items away from his tough pincer grip does create a scene and the boy doth protest.  I tell him that sharing is caring but he responds in dramatic tears. I have to work on that I think. The Jay bird acts like it’s the end of the world when it comes to changing his clothes but I express that while he lives under my roof he will wear clothes except at bath time. 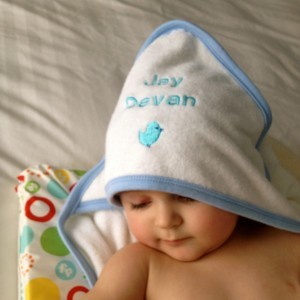 Bath time is by far the favourite part of Jay’s day he loves it so much splashing and kicking water with the biggest smiles! we have been taking him to the swimming pool he is a water sign after all.