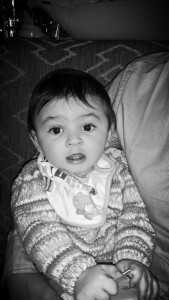 At 9½ it’s suddenly dawned on me that baby Jay is really growing up and the realisation that it won’t be long before he turns 1!  The biggest change in what has been a very difficult month for Jay is the emergence of more teeth it has been tough both emotionally and physically. I have tried to keep him as comfortable as possible ever since he started teething when he was 3 months old.  He has 4 teeth with another 2 molars coming through at the top all part of growing up I guess and he won’t remember any of this teething business when he’s older.

Fortunately he isn’t a clingy baby and although a few months ago he seemed  nervous around strangers he is now very curious when he meets new people and especially loves babies! we are attending nursery rhyme time and story time each week and he  is interested in anything and everything,  especially loves toys that make noise (rattle, keys, etc.) He is a nosey parker and wants to know what is behind every door and still loves a good game of peek-a-boo! 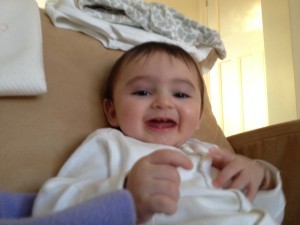 He babbles to himself when playing, and makes the most hilarious noises when we’re hanging out together. But boy can he shriek! I am told I will struggle to shut him up once he really starts talking. I am having to use the word “no” much more than before and he is beginning to respond to his name when he he is being called. He understands some words like “clap” and brings his hands together. He also looks up at the ceiling light when we say “light” and he adores lights. He is not a crawler but enjoys standing with support. He has worked out how to move backwards in his walker but hasn’t mastered going  forwards!

Bath time is party time! his legs start going even before he enters the water and then it’s full speed ahead. My dad jokes that he will reach New York soon. He has gone from a A star sleeping baby to getting up at night now. It’s been a real shock for me especially as I’ve been enjoying my sleep very much these past few months.  He is drinking around 700-800ml milk a day but hasn’t been eating too well which has been down to teething.  We all seem to have to take it in turns to entertain him so that he will actually eat some days. He does love a bit of buttered toast though. He has a pincer grip but manages to squish his food in his fist so brings it to his mouth and gnaws at his fist. The moment you try to correct his ways he thinks you are taking his food away and he isn’t pleased.  The development review went well recently and his stats are 19lbs 70z and 28 inches/ 73cm  long.

I keep imagining what he will sound like when he actually starts talking.
I really love him so…… 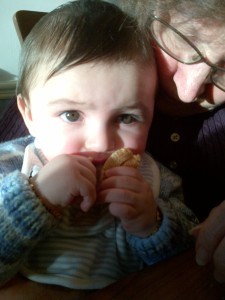