I haven’t done an update post regarding my young human for a while and admittedly finding time appears to be much more of an issue now as I deal with an active toddler who doesn’t want to sit still and insists we do everything his way.  I do appear to be living in MeltDown Central.  What was I expecting?

Jay has been exhibiting behavior associated with the “terrible twos” from at least 17 months old together with teething is just a crazy combo (Lord help me). I know this is not uncommon and but I realise I need to  focus on helping  him learn how to develop a bigger vocabulary that will make it easier to communicate with me and others especially as he is not at nursery. He is a loud boy for sure total oppostite to his mother and his vocabulary is really good (I would say that I know) but he is talking so much more in the past month and people have commented on how much he understands already. Words like red, blue, orange, oval, square, bubble, heart, round, bye, baby, eight, six, triangle, open door, one, door, up, apple, cheese, purple, fish (or sheesh) as he calls them.  When he calls me “mumma” it melts my heart.  He loves saying “daddy” more.  We go to classes at the library and playgroups and outings at the park as well as his weekly B&Q lighting and garden visits. Swimming is still his favourite. Propeller legs Jay has a natural affinity for water that’s for sure.

This electronic gadget generation of ultra youngsters are quite something I think. How he is able to navigate around the iPad and iPhone with ease is beyond me. I watch as he drags videos across the screen scrolling up and down the list looking for his next favourite.

Wanda and the Alien

In the Night Garden

Keira Knightly seems to catch his eye on the Channel advert which is fine as it’s my signature scent of choice.

The Wheels on the Bus in Spanish

As exhausting as my weeks can be I am really pleased with his development so far and he is incredibly inquisitive and wants to know how things work. The focused concentration he displays sometimes is mind boggling! I wonder what he’s thinking.  I love his cute little voice and how he tries to copy us. He does make us laugh which makes parenthood worthwhile.  He enjoys helping me around the house with chores. He loves using the Bissell Sweeper which I strongly recommend for every household. He brushes my hair and does enjoy playing with my makeup bag and contents but that’s the only way to distract him while I change his nappies and change his clothes. There was an incident when he broke my new Mac lipstick  but he was forgiven.  There was an incident when he nearly tore up a £20 note and we had words.  There is this matter of changing his daily garments that is an ongoing battle. I do feel like I’m having a scrap with an octopus most days plus we have an 11.5 hour flight next month to contend with… that’ll be fun. 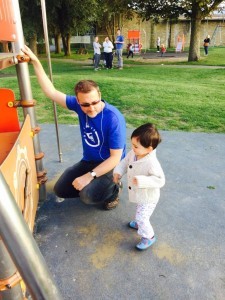 The most recent development is that he now he says “poo” when he has made a deposit whether it be pee or poo in his nappy and pats his bum while looking at me (nice).  Kind of like that Asda advert .  It might not be the most glamourous of milestones but it makes me happy. I still feel he isn’t completely ready for toilet training but I’m going to try and work on this with him over the next month and see how things go. 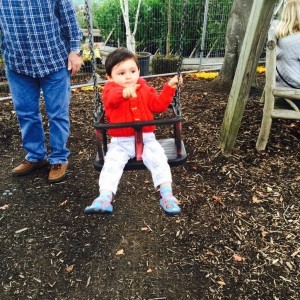 He currently stands at 84cm tall and weighs 11.3kg or  approx 25lbs for the Imperial users like me. My slimline tinker doesn’t have a huge appetite and is more of a grazer. This has been my biggest headache trying to get him to take an interest in food. I still stick to giving him three meals a day and snacks  as well as three bottles of milk a day breakfast  at lunch and bedtime.  Recently he’s been loving brown rice and salmon (get him).  He is fond of food with aromatic spices which is handy as he’s half Indian. 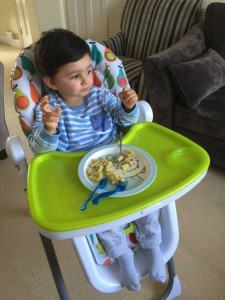 Sleep is something I crave. Jay seems to have energy at 3-4am and wants to play despite having a 1-2 hour nap late morning. Some nights he sleeps through and other nights result in me wearing industrial strength concealer the next day. Dear God please do not stop making Mac Pro-wear. 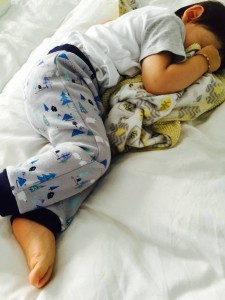 But now I must get back to my sleep raider who appears to have fallen out with his football.